It’s that time of year again, the weather is getting colder, decorations are going up everywhere and Christmas tunes are blaring from grocery store speakers. The festive season is fast approaching which also means it’s time for the annual Access Self Storage Christmas charity campaign.

This year 17 Access stores are getting into the Christmas spirit with each store having allocated a 50-square foot unit to be filled with gifts and donations for various organisations.

This is where you, our loyal customers, come in. Our Christmas charity campaign would be nothing without your donations. Last year we received over 500 gifts, including books, games and home-made creations and this year, we’re challenging you to beat that number!

Our Reading store collects for the Christmas charity campaign

We at Access selected the particular charities because we really believe in the work they do and would like to help them make a difference this Christmas.

Access Self Storage spokesperson Kevin Pratt says: “Through the Christmas charity campaign we aim to bring some happiness and holiday cheer to those who need it most. So, we’re calling on local residents to start donating as soon as possible. We also encourage local businesses to get behind the campaign and support the incredible work carried out by the charities we’re collecting for.” 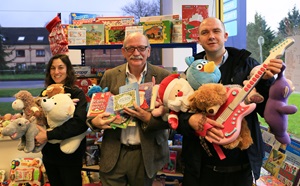 If you’d like to contribute you can drop-off your donations at one of the stores below from now until 10th December.

We thank you in advance for your generosity.