Looking for self storage in Somerset? With our Bristol branch located just off the M5, we have all of your personal storage and business needs covered. 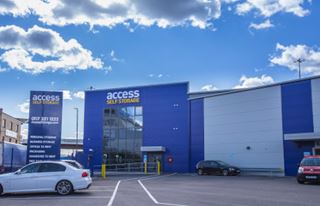 Self storage in Somerset

Our secure storage units in Somerset include 24-hour access, CCTV, free Wi-Fi and a selection of business services including flexible office space, a telephone answering service and mailboxes, removing the hassle from self storage.

Whether you’re planning on storing a few things while you move to a new house, or you’re looking to keep some extra stock safe and dry, Access Self Storage Somerset can help.

Located in the South West of England, Somerset county is known for its open countryside, sandy beaches, and as the home of the world-famous Glastonbury festival. Somerset is an area of outstanding architectural beauty, with 11,500 listed buildings, 523 ancient monuments and 36 English heritage sites. The Somerset coast is one of the most beautiful coastlines in the UK, and it also has a rich history – it served as the base for King Alfred’s resistance against the Vikings, and also features guard posts from the first and second World Wars.

Somerset is also known for its rich literary heritage. T.S. Eliot’s ashes rest in East Coker, and Evelyn Waugh spent the last few years of his life in the village of Combe Florey. Samuel Taylor Coleridge was once a resident of Somerset – Watchet Harbour served as the inspiration behind the poem The Rime of the Ancient Mariner. Somerset was also the background for much of Jane Austen’s work. Are you a literature buff with too many books and not enough space? Why not keep them safe at Access self storage in Somerset? We have units ranging from locker size to entire rooms and a covered loading bay so you can unpack in the dry!

Another jewel in Somerset’s crown is the village of Cheddar. It’s here that Cheddar cheese first originated – Cheddar Gorge, on the outskirts of the village, is home to a number of caves which had provided the ideal climate for the cheese to mature. Beyond its cheese-maturing capabilities, Cheddar Gorge is in the Mendip Hills, home to some breath-taking views and well worth a visit. Do you go hiking in and around Somerset regularly? Why not store your boots and waterproofs at our Access Self Storage Somerset branch? With 24-hour access, there’s no need to wait around till opening time – so you can hit the trail before the sun comes up.

Glastonbury is a small town in Somerset, steeped in myth with its many ancient and medieval sites. Rumour has it that Joseph of Arimathea, the man entrusted with the burial of Jesus, fled Palestine for England and brought with him the Holy Grail, which he stored in a Glastonbury well. Glastonbury is also the destination for the popular arts festival, where some of the world’s greatest music acts, from The Who to Oasis, have performed over the years. Need a place to store your festival camping gear during the winter months? Access Self storage in Somerset could be the answer. The team at our Bristol branch has you covered. Get in touch with them today for a personalised quote on Somerset self storage!