Are you in need of storage solutions in Derbyshire? Whether you’re looking for business or personal storage, our Access Self Storage Derbyshire branch will have everything you need! 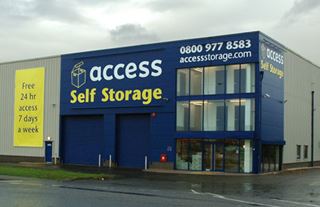 Our Derby store offers a range of secure individual storage units, 24-hour access and CCTV monitoring, as well as a selection of business storage options including telephone answering and mailboxes. Whatever your storage requirements may be, our self storage Derbyshire branch can help.

Located in the North Midlands, Derbyshire is known for its expansive countryside. A favourite amongst hikers, Derbyshire is home to the renowned Peak District which incorporates the southern end of the Pennines. Ironically, despite its name, the landscape is relatively lacking in sharp peaks, with rounded hills and grassy meadows dominating the area instead. The Peak District National Park became the UK’s first national park in 1951 and remains hugely popular with nature lovers to this day, welcoming millions of tourists and walkers every year. The park boasts over 1,600 miles of paths and 58 miles of cycle trails. Are you a keen hiker, and find that storing all your equipment during winter can be tricky? Why not consider a storage unit? With 24-hour access available, you can easily pick up your things from our Access Self Storage Derbyshire branch at a time that suits you.

Derbyshire also boasts the impressive Chatsworth House. Home to the Duke and Duchess of Devonshire, the Cavendish family has lived here since the 1550s. With over 30 rooms and 105 acres of gardens, the house has been labelled the Palace of the Peak. It was fittingly used as the setting for the 2008 film, The Duchess, featuring Keira Knightley. More recently, one of the rooms made an appearance in the big-budget Netflix production, The Crown, as the backdrop for a conversation between Queen Elizabeth II and her mother. Chatsworth also hosts the annual Chatsworth Horse Trials each May, attracting some of the best international riders. The fields around the house form the perfect landscape for the cross country, show jumping and dressage courses. We can’t store a horse for you, but if you’re on the hunt for somewhere to store all your riding gear (and awards of course), look no further than our Access Self Storage Derbyshire branch. With large vehicle access and covered loading bays, it is easy to drop and pick everything up.

Derbyshire is also celebrated as the home of the iconic Bakewell Tart. The almond and cherry treat, a popular choice for tea parties, is said to have been made accidentally by a cook in the town’s Rutland Arms Hotel in 1820. It is believed that the almonds, sugar and eggs which are the core ingredients, ended up like a custard layer above the jam as the cook attempted to enrich the pastry of a jam tart. When it comes to storing all your cookbooks and equipment, Access Self Storage Derby can help. With shelving available, you can store all your baking belongings neatly and securely.