Waste not want not! Access Self Storage goes upcycling

We really don’t like it when people throw good stuff away. Okay, okay, some of this may be self-interest: if everyone threw good stuff away, we’d have to find something else to do, and what, really, is a world without Access Self Storage? It’s like a beach without sand, or a rainbow without colours. But also, it’s just plain bad to waste perfectly usable items.

Upcycling – basically, reusing your unwanted stuff to make new stuff – is a way to put the odds and ends you’ve got lying around in your home to good use. But to be honest, we haven’t got much of a handle on it ourselves. Not to worry: we did what we always do when we want to know more about a subject – we asked someone who does!

Getting on the upcycle

Maureen Byrne officially started upcycling two and a half years ago (her work can be found here), but says she’s really been doing it for a lot longer. “I’ve always tried to reuse and recycle items, whether that’s items of clothing that can be passed on to my daughters, or bits and bobs that can be repurposed for use around the home or garden”, she says. 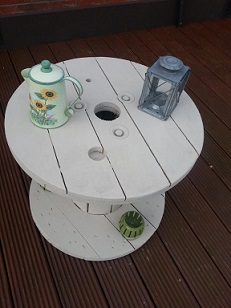 In particular, Maureen is keen to emphasise the influence of her mother. “She was an extremely frugal person – she had to be, being from a generation where resources were scarce and waste unacceptable. She worked in Lipton’s convenience store during the war and oversaw rationing; she also made clothes by hand, reusing other materials, for her children and grandchildren, and knitted with scraps of wool for African children’s charities.” It sounds like, in many respects, Maureen’s mother was one of the first upcyclers!

It’s fair to say, then, that upcycling is as much a state of mind as it is an actual process. Maureen adds: “It’s wasteful to throw things out when they can be repurposed – I usually try to think if something might come in handy someday.”

What advice does Maureen have for beginners? While there’s no official upcycling rulebook, she does cite one unwritten law that every newcomer should follow. “Use your imagination and see beyond the surface”, she says. “Everything has a dual purpose; while it may no longer benefit you, it may well benefit others. There’s no right or wrong, just get creative and have fun with it. One man’s junk is another man’s treasure!”

What can you upcycle?

So what sort of things can you use for upcycling? We assume it’s not just a case of combining stuff with other stuff – ToasterVac! FridgeTweezer! LobsterPhone!

Upcycling is an art form, and it should be taken seriously – and it starts with making sure you’ve got the right materials. 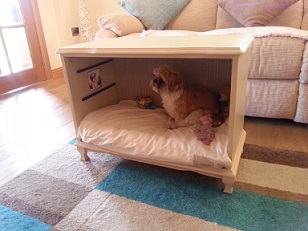 “Around the house, we reuse as many items as we can as long as they’re in good condition”, Maureen says. “We reuse wrapping paper and gift bags that are in good condition, and we’ll collect and re-use buttons, ribbons, and glass jars.

She adds: “When it comes to a big project like furniture, a clean, a polish, and a lick of paint is often enough to bring an old item back to life – but if it needs more work, you can repurpose tables, cabinets, dressers, chaise longues – anything, really.”

This piece is an excellent example. Why throw that old chest of drawers away when you can upcycle it? One of Maureen’s most fascinating creations is this unconventional dog bed: by removing the drawers, she’s created a shaded, luxurious resting place for miniature mutts. Much better than letting it get scrapped or used for kindling!

Can you upcycle really weird stuff?

Our final question revolved around whether or not it was possible to upcycle slightly stranger stuff. Like, everyone’s upcycling with cabinets and that – we want to know if it’s possible to upcycle with, say, a stuffed boar’s head that you picked up off a swap site as an impulse buy, but it kind of creeps visitors out, and you can’t get rid of it (because really, who wants a stuffed boar’s head?), so you’ve come down with a bad, bad case of buyer’s remorse. Asking for a friend.

“It’s possible to upcycle almost anything”, Maureen says. “I recently stumbled on an old industrial wooden cable reel that I scrubbed up and painted for use as a patio table.”

“It’s certainly a talking point when we have guests over!”

More of Maureen’s work can be found at Belle Made. If you fancy getting started yourself, we’ve got space all over the country – whether you need self storage in Portsmouth or self storage in Nottingham