Having it all: how to raise a family and pursue a fulfilling career!

Children: why do people have them? They seem like a lot of work. They cry constantly, they soil themselves more often than is appropriate, and they have extremely poor taste in TV. Seriously, what’s up with In the Night Garden? Why is Sir Derek Jacobi doing the voiceover? He’s one of our finest actors. It’s ridiculous.

Still, despite all that, they are worth the effort. They’re cute, they frequently grow up to be decent people, and they are, after all, the future of humanity, which is a big plus (we’ve seen Children of Men – didn’t look like a great time, to be honest). But when you’re a busy, professional parent of young kids, it can be tough to balance your responsibilities to work and family – to the point where it will often seem like something has to give.

This is truer than ever in the summer holidays, when these adorable little bundles of chaos are around all the goddamn time. A hundred years ago they would have been up a chimney; in 2015, they get six entire weeks off. In general, however, trying to work while keeping them fed, watered, and entertained can be a nightmare, so we asked three busy professional parents of young children for their best advice – and their coping strategies. 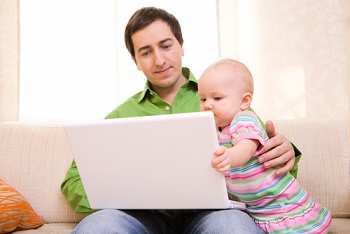 Victoria Casebourne owns and operates The Keepsake Co., a family-focused online shop that designs and sells bespoke mementos such as jewellery and 3D life casts. She also provides valuable mentorship and business supplies for parents looking to strike out on their own. A proud mother of two, Victoria is well-acquainted with the challenges of raising children while maintaining an active working life.

So how does she find fulfilment on both of these fronts?

“As a mum, I believe that it is super important to build your business on your own terms”, she says. “By this, I mean, keep fresh in your mind why you started in the first place. Often, parents will start a business to spend more time with their children and to have flexibility. Just as often, however, it ends up being a prison that consumes all of their time and causes them to lose sight of what’s important.”

This isn’t to say you shouldn’t start a business, of course – in fact, with outsourcing, automation, and the widespread implementation of flexible working, it’s easier than ever to do so. But, Victoria adds, “it helps to have a really clear vision of what you want your life to be like, and have some tools to remind you of it on a daily basis – such as a vision board or affirmation. When you feel your business pulling you in a direction you are not comfortable with, be strong and pull it back.”

Having a plan and being able to put it into action are two different things. It’s no good having the blueprints for the Burj Khalifa if you’ve only got the materials to build a corrugated-iron outhouse. Implementing your grand design for your life can be tough indeed.

Fortunately, Sally Hall of Dorothy and Theodore, parent to a 7 year old, a 3 year old, and a 2 year old, has some experience with this. “My biggest coping strategy is to be fully engaged in whatever I’m doing”, she comments. “If I’m with my children, I check emails as little as possible, and don’t deal with anything work-related unless I absolutely have to. Likewise, when I’m at work, I try to focus fully on that and to do everything I can to make my business a success.”

Of course, having the day covered is one thing – but unlike work, having kids is a 24-hour commitment. What about those long sleepless nights, when you’re exhausted and your children still need your attention? “Honestly”, Sally says, “I have a can of Coca-Cola. It’s my ultimate pick-me-up.” And when they’ve gone to bed, you can always have a glass of wine (or several) to help you wind down! 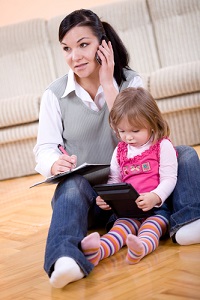 Look, when you’re working in the house, or just generally trying to do some housework as a stay-at-home dad or mum, there’s no getting around it: everything children like to watch is annoying. There’s the aforementioned In the Night Garden – a half-hour show about a little blue dude with a blanket, the college of cardinals, and a tricycle-riding Michelin Man that polishes everything in sight that the under-threes find endlessly compelling. There’s also Rastamouse – which is exactly what it sounds like – and even timeless classics like Sesame Street can get a bit tiring over time.
Sally-Ann Tarver, trichologist at Cotswold Trichology, understands this all too well. “My daughter’s older now, but I remember the daily onslaught of mind-pickling madness that CBeebies would bring. The main thing I have to say is that they do grow out of it eventually: they’ll get into things like Frozen and Brave, sure, but they won’t want to watch them constantly.”

She adds “However, the sheer repetition should also incentivise you to make sure your children aren’t watching too much television. While work is important, it’s equally important to make sure they’re occupied with a diverse range of interesting, educational activities.”