Is there a method to your dad's storage madness?

A kid’s relationship with their dad – if they’re lucky – can be one of the strongest they have in their lifetime. Lucky or not, however, it’s always one of the strangest. Let’s face it: when they’re not at work or in front of judging eyes, dads get comfortable – and when they’re comfortable, they get weird. They pick their noses, they watch hours of Bravo TV, and they try to barbecue everything in sight.

Statistically speaking, men are ‘slower and less organised’ than women, and generally poorer at multitasking. A dad, faced with priorities like work, shopping, sports and naps, will often seem to just throw his things wherever. There’s sometimes a method to the madness, but not always – and there’s no better way to make your dad smile this Father’s Day than helping him sort it out.

We spoke to our community to find out how some of the nation’s fathers are organising – or not organising – their junk, so we can offer some tips for how to help them do it better!

When dads become dads, they have to give up certain things. They don’t go out as much, their financial priorities shift, and they may have to sacrifice some of their favourite hobbies.

When you move to a bigger house, however, he’s suddenly got options. And with this newfound freedom, he’s liable to make a huge mess. The ‘man cave’ is a classic way of keeping this mess away from the rest of the family – and getting some ‘alone time’ away from his responsibilities. And what’s more, it’s good for him: a study in Men’s Health suggested that being able to ‘temporarily withdraw from family life’ can reduce your dear old dad’s cortisol levels. 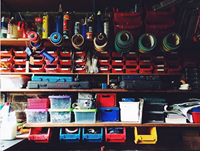 Look: it might be a room dedicated to letting him do his thing, but there’s no denying that over time, a manspace can get pretty gross. Pyramids of empty beer bottles. DVDs left out of their cases. Enough old pizza boxes to make a small fort.

Helping him sort through his stuff is a great first step: give him a hand tidying it up the first time, and then create a cleaning rota comprised of small, manageable tasks that – over the week – will result in a tidier, less pungent manspace. If he doesn’t stick to it, introduce a kind of swear jar: he won’t fail in his dadly duties if it hits him in the pocketbook! A tidy man cave can actually be an asset to the family home. Check out this photo Kim sent in of his dad’s hyper-organised garage!
Tom Harrow, CEO of Shavekit, however, has no problem organising his personal space. “I have a man cave dedicated to bikes”, he says. “There’s a hardwood dining table used purely to showcase the bike I’ve most recently finished working on. The room is immaculate!”

Tom also notes that “there’s a lock on the door so the kids can’t access it.” This might be the most important bit; if he has to lock it up, you’re probably not doing a good enough job of leaving him alone. Let him have his space!

2.Storm in a teacup

For example, Rachel’s father uses a system that pretty much only qualifies as storage on a technicality. “Odds and ends – normally including my keys – get tidied up into a teacup, under a lemon. Why? Because there’s a lemon tree in his garden, obviously.” 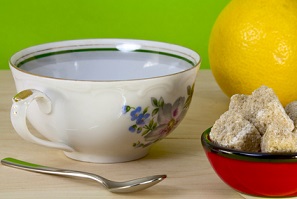 Well, when it’s put like that, we can hardly disagree. For better or worse, however, a dad’s unique storage tendencies often aren’t limited to his leisure activities. Sometimes, they’re so strange that they loop all the way back around to sort of making sense

Dads, and people in general, do things like this because that’s how they’ve always been done. If your situation is similar to Rachel’s, one option (particularly with Father’s Day coming up) is to buy gifts that subtly encourage positive storage habits. In Rachel’s case, a wall-mounted key holder might be an excellent start, and it’s definitely better than chopping a beautiful tree down!

3.Stable as a table?

When you can’t find your keys because they’re under some random fruit, it’s a bit of a pain. When it comes to your most essential items, however, poor organisation can be a far more serious matter.

Take Jeanne, for example. Her grandfather has devised a way to store essential documents, mail and pictures so that they can also work as improvised napkins. “He puts all of his important papers underneath his placemat at the kitchen table”, she says. “Which is why all of my family photos have ketchup on them.”

In Jeanne’s case, getting him a photo album for Father’s Day might be a good first step. But it’s also fair to say that there’s always a risk of damage when you’re only keeping physical copies of things. With photo sharing services like Flickr, Instagram, and others, it’s easy to upload your most treasured memories onto the internet, where they’ll be safe from spilt milk or rogue dollops of mustard.

Where this won’t do, i.e. with documents that shouldn’t be copied, consider buying a filing cabinet and placing it in secure self storage. Out of sight, out of mind – and out of danger!

Moving a cat to a new home | What do you need to know?