4 cooking gadgets you didn't realise you needed until just now

Making your own sushi is one of those things that’s hard to do well, but it’s always worth doing nonetheless. It has downsides – the stench of dead sea creatures will follow you around for a while, so you’ll need a shower (or at least a once-over with some antibacterial hand gel) – but there’s a certain undeniable pleasure in collecting your preferred ingredients and assembling them within a pristine maki roll.

If only it were that simple. Alas, like anything else, sushi making is a talent. Some people have a preternatural ability to make immaculate, delicious, fully-formed rolls; others wind up covered head to toe in rice and Clingfilm. Not everybody has the gift – but everyone should be able to enjoy sushi.

This ‘deadly accurate culinary cannon’ allows the sushi aficionado with no actual ability to speak of to just shove a bunch of stuff into a tube and – if you can handle the slicing bits – create something functionally identical to the work of a genuine maki master (in the eyes of a casual observer anyway).

Maybe using this cooking gadget technically counts as cheating – but what your dinner guests don’t know won’t hurt them!

The philosopher Henri Amiel once said that “uncertainty is the refuge of hope”. Well, maybe. But cooking isn’t philosophy, and for an amateur or professional chef, uncertainty is the prologue to despair. It’s as much art as it is science: even when Heston Blumenthal does something like marinate a live dog in a bathtub full of apple cider vinegar, he’s doing it with clarity, purpose, and – most importantly – precision.

The last bit is particularly hard to master. When it comes to something like steak, for example it might be easy to tell if you’ve cooked it John Carpenter-bloody or burnt it to ash, but understanding the bits in between can be tough.  Medium-well, medium-rare, or even plain ‘medium’ can be hard to discern. 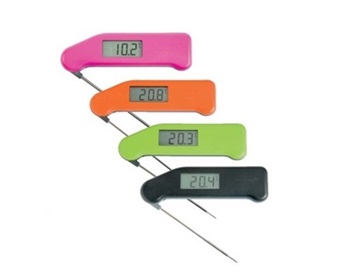 Sous Chef’s Nicola Lando – one of our deserving Business Awards nominees –  recommends the Superfast Thermapen Thermometer, and goes as far as to call it the “must-have cooking gadget for everyone”. It’s hyper-accurate (to a range of 0.4%), it’s super-fast (offering readouts on its digital display within three seconds), and can test everything from cakes to juices – and beyond.

Lando says: “It lets you cook your food perfectly every time. Just stab whatever you’re making all the way through and you’re off!”

3. The cake knife that sings happy birthday as you slice

We believe this particular cooking gadget speaks for itself. Or sings.

“Da best tyme 2 cry iis wen ur cuTiN oNionS coz every1 fink it jus da onyuns.” These are the sage words of whoever authored this grammatical, typographical, and syntactic abomination, and, to be fair, they’re not entirely wrong. Cutting onions is a reliable way to get the tear ducts going, and can serve as effective emotional camouflage if you’ve just watched The Green Mile or if your football team recently lost a big game. 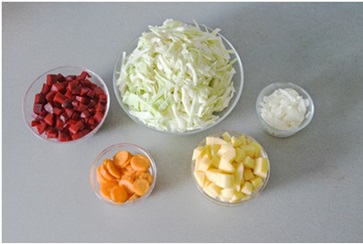 But if you’re more into chopping than crying, you have options.

Behold, Briefton’s Quickpush Food Chopper, which purports to remove the “crying, mess, odour, and clean-up” from the onion-cutting process. It’s a sophisticated cooking gadget, but it works in deceptively simple fashion: simply slice your vegetable in half, set one of the two segments on the blade, shut the lid – and repeat.

A good chopper will cut your prep time just as surely as it cuts your onions!

If you’re looking for somewhere to store your kitchen accessories when they’re not in use, Access Self Storage is all over the country: from Basingstoke to Beckenham, from Romford to Coventry, and beyond.