Top things to do in Kings Cross

Do you sometimes find yourself with time to kill in Kings Cross? Perhaps you have a train to catch but have some free time before continuing your onward journey and you need something to fill the gap. For top things to do in Kings Cross here are five cool activities.

Kings Cross has a rich and colourful past, and has helped shape London into the city we see today. Its significance as a transport hub has made it a meeting point for city dwellers and travellers throughout history. It has recently gone through a major regeneration program that has transformed it in to one of the coolest and most varied locations in the city. You can eat, drink, shop and take in a bit of culture or nature all within a square mile.  So how are you going to spend your time there? Here's our top things to do in Kings Cross.

An absolute must for all Harry Potter fans. Kings Cross has a long affiliation with the Harry Potter stories, with the Hogwarts Express leaving from platform 9 ¾. Harry and Ron steal the flying car from outside the station and in the very final scene from the Deathly Hallows, Harry, Ron, Hermione and Ginny wave their own children off to Hogwarts from Kings Cross station. Want to be part of the magic? Hunt down the location within the station and see if you can run through the wall. If you make it, you are officially no longer a muggle. 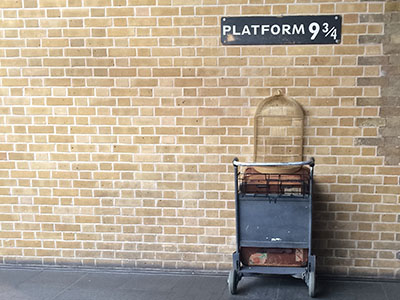 A visit to the British Library should definitely be on your to do list. Go discover the 150 million items and a collection that dates back 3,000 years. Spend a few hours in the free exhibition Treasures of the British Library which includes the Magna Carta, Leonardo da Vinci's Notebook, Beatles manuscripts and a recording of Nelson Mandela's Rivonia trial speech. 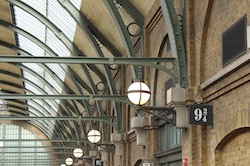 The Library has 310,000 manuscript volumes: from Jane Austen to James Joyce; Handel to the Beatles. If you saw 5 items each day, it would take you 179 years to see the whole of the collection.

Not enough time to take it all in? You could just sit in the courtyard and eat your lunch next to Sir Isaac Newton.

A short walk up the hill at the back of the station will bring you through the shopping plaza to the canal. Here you can enjoy a river cruise or a nice canal side-walk, eat at one of the many bar restaurants or take in a film at the outdoor Everyman Cinema. 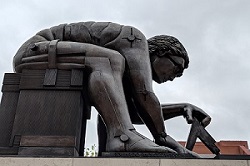 Fancy finding a bit of the countryside in the heart of the city? Again, just a short walk from the station you will find Camley Street Nature Park. It is a nature reserve created from wasteland between the two stations. It consists of woodland, grassland and wetland and is home to birds, butterflies, amphibians and many types of plant life.  A great option if you want to escape the towering blocks and bustle of the city for a few hours.

The church and its surrounding burial ground dates back to the time of the Norman Conquest. It is believed to be one of the oldest sites of Christian worship in the land. They regularly hold concerts and events. The churchyard is well worth a visit, a very notable and notorious place. It is mentioned by Charles Dickens in A Tale of Two Cities. The poet Percy Shelly met his soon to be wife Mary Shelly over the gravestone of her mother Mary Wollstonecraft. It was well know location of the body snatchers, who would exhume the graves and sell the bodies to the local medical school. In 1860 a young Thomas Hardy was charged with overseeing the excavation of the churchyard and he was responsible for creating the Hardy tree which is well worth a look. It has also featured many times in the Christopher Fowler “Bryant and May” novels in which the whole of the Kings Cross area provide a colourful backdrop for his amusing and informative detective stories.
Whatever you decide to do, we are sure you will not have to look far to find interesting and unusual things to do in Kings Cross. There is really is something for everyone.

If you’re in London and need self storage, we have lots of facilities in London and the surrounding areas. You can use our handy store finder to locate the one closest to you!