Have you read our piece on DIY Tips from an expert at Wickes? We think these real-life DIYers might have missed the memo...

Stuck waiting for the joiner to come and box in new piping? Why use plastic when you can use cheap cardboard? Minus points for decoration – you could have least used a felt tip pen to draw some snazzy patterns. Plus points for innovation, however – it’s better than nothing. Maybe? Thanks to @CSlapStitch for sharing!

Conclusion: It doesn’t look pretty, but for a short-term fix it’s an okay idea. You gotta do what you gotta do! 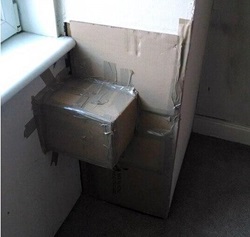 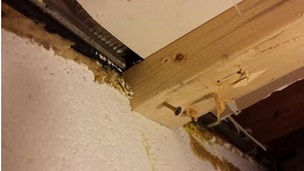 You know, at first this just looks like a skewiff nail. No big deal, right? Until you realise it’s going directly into a wire... eek! A prime of example of how the electrical stuff should be left to the pros – this could have gotten nasty. Thanks to @DanMoldy for the images!

Conclusion: It looks like a small mistake, but this could start a fire – or could have electrocuted the person hammering it in. Not cool.

“Dave, we need something to stop the BOILING WATER escaping from this leaky pipe.”

“Eh, plasticine will probably work. Whack a bit on.”

Conclusion: It could be worse. It could also be way better. But like the old adage goes - “If at first you don’t succeed, try two more times and then call in the experts”. 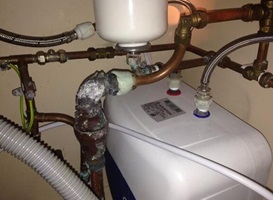 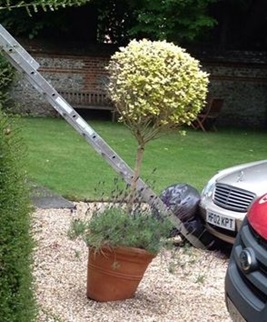 Supporting a ladder adequately when working at height is very important if you’re particularly attached to being alive. So it’s mildly concerning to see this makeshift support made out of a couple of bin bags and a pricey Mercedes-Benz. Thanks to @JoelHuntz for sending in this image and the last!

Conclusion: If someone falls, the best-case scenario is that they’re cushioned by the glass of the expensive car’s windscreen, rather than breaking their neck. Not ideal.

Think a door’s main requirement is that it lets you in and out of places? Well think again, because this door is a rebel and it doesn’t care who knows it. Thanks to @_dannyjwb for this gem.

Conclusion: Less of a #DIYfail, more of a “#not paying attention to what you’re doing” fail. Yes, it’s annoying, but you’ll still be able to get out of the door – just press the handle down, as usual.