10 Tunes to Celebrate our Dads

With Father’s Day coming up, it can be a little tough to find songs to make the paterfamilias proud. The truth is, most songs about dads – from the rock ‘n’ roll era-onwards – are a bit depressing. “Cat’s in the Cradle”? That’s all about an infinite cycle of fathers and sons disappointing and failing to make time for each other. Yeesh. “A Boy Named Sue”? All about a guy giving his son a girl’s name, either to toughen him up or as a really mean – and not all that funny – joke.It can seem like bad fathers get all the lyrical glory.

The truth, however, is that there are plenty of songs out there about good father-child relationships – enough for the team here at Access Self Storage to compile our very own Paternal Playlist! 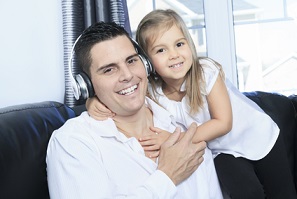 Queen Bey’s paean to her papa is sure to tug at the old heartstrings. An affecting portrait of a truly supportive dad. Bike rides on the bayou, matching tattoos, and pure, unconditional love. Can you say ‘d’aww’?

By all accounts, Beatles legend John Lennon didn’t do too well on his first go-around at fatherhood. But he more than made up for it later in life, as this adoring ditty about his then-new born son Sean proves!

The point is Harry Nilsson was really good, and he also wrote a bunch of songs about dads and sons – from both points of view! “My Best Friend” is a touching tribute to his own kid, and “Daddy’s Song” is a jaunty reflection of the lessons he learned from his own father.

This 1992 rap classic begins on a sad note – C.L. Smooth admits his ‘biological didn’t bother’ – but don’t be put off: the rest of the song is a loving remembrance of his granddad, who took him “from a boy to a man” and taught him right from wrong. Who’s your real dad? The man who raised you.

Taken from David Bowie’s seminal 1971 album Hunky Dory, the pop chameleon wrote this song in anticipation of his son’s arrival. He was more than a little afraid of fatherhood – “Don’t pick fights with the bullies or the cads/’Cause I’m not much cop at punching other people’s dads” – but there’s also clear excitement: “If you stay, you won’t be sorry/’Cause we believe in you!”

Bowie/Ziggy/Aladdin/White Duke/whoever he was at the time probably shouldn’t have named him ‘Zowie’, but the child in question did become the acclaimed film director Duncan Jones, so it all worked out in the end.

6. Luther Vandross – Dance with My Father

Speaking of David Bowie, did you know Luther Vandross once worked as his backing singer? And also sung about fathers and fatherhood? Check this out!

This Brian May-penned track from Queen II is less about an individual father and son, and more about all fathers, and all sons: “Take this letter that I give you/Take it sonny, hold it high/You won’t understand a word that’s in it/But you’ll write it all again before you die.”

“Well, the idea’s going to go on for a long time. The song, it’s not so long.” Yusuf Islam (the artist formerly known as Cat Stevens) was quite correct: kids have always grown up quickly – too quickly – and it’s worth listening to your dad when he tells you to chill and figure things out at your own pace.

“The things my father said would make me a better man.” What more needs to be said?

10. Will Smith/Bill Withers – Just the Two of Us

It might be cheating a little to have two versions of the same song at number 10, but here in the Access Self Storage offices, we honestly couldn’t decide on which one to use. The older generation were more into Bill Withers (he of “Lean on Me” and “Ain’t No Sunshine” fame), while the younger crowd went for Will Smith (he of Fresh Prince and Wild Wild West fame). So we decided to stick both here and let you choose!