On the lookout for storage around Manchester? 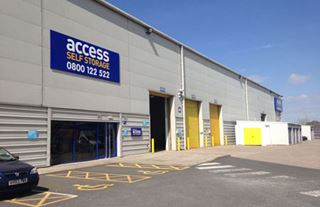 With our Manchester branch conveniently located off the M56, it’s easy to drop off and pick up all your personal and business belongings whenever you need.

Our secure individual storage units, 24/7 access, CCTV monitoring and range of business storage options including a telephone answering service and mailboxes take the hassle out of self storage. So, if you’re in need of storage around Manchester, contact us today for a personalised quote.

The second largest city in the UK with a population of more than half a million, Manchester is one of the booming cities of the North. With a buzzing city centre, Manchester is also surrounded by the beautiful countryside of the Cheshire Plains and the Pennines. Regarded as the birthplace of the industrial revolution, Manchester has always been at the heart of exciting advances in science, politics and culture.

Manchester is synonymous with great British music. Legendary bands such as The Smiths, Joy Division and Oasis started their journey’s in the city. Oasis became a global sensation before they split, selling more than nine million singles they became the fifth highest selling UK band of all time. As one of the forces behind the celebrated Brit Pop movement, their songs remain legendary both in and out of Manchester.

Venues such as the infamous Haçienda night club and Manchester Academy have also helped propel Manchester on to the musical map. The Haçienda’s club nights and the Academy’s stellar line ups have included the likes of Adele, Kings of Leon and Lady Gaga. Are you a music lover? If you’ve got a large collection of CDs, vinyl and merchandise that you can’t part with but need to make some room in the house, why not store everything safely and securely in one of our Manchester storage units? Our friendly staff will be happy to help you find the ideal solution.

The city is one of the football capitals of the world. The two Manchester clubs, United and City have a fierce rivalry and loyal fanbases around the globe. Star players like David Beckham, Cristiano Ronaldo and Sergio Aguero have donned either the red or blue shirts, and the world’s best managers from Jose Mourinho to Alex Ferguson have coached the two giants. Both teams have won their fair share of trophies, but when it comes to team shirt sales, Manchester United come out top, selling a massive 1.75 million shirts a year! If you’ve been following United or City for decades and need somewhere to store all of those matchday programmes, scarves, and replica kits, consider putting them in our flexible storage around Manchester!

A little-known fact about Manchester is that the first ever computer was designed and built at The University of Manchester by the late Tom Kilburn and Freddie Williams. The Small Scale Experimental Machine (SSEM) - nicknamed The Baby - executed its first program On June 21st 1948, and modern day devices all owe their success to this ground-breaking invention. The first computers were so big they took up a whole room – you probably don’t have quite as many laptops as that in your house – but remember that if you need some extra space to keep things safe, our CCTV monitored units could be just the ticket.

Contact staff at our Access Self Storage Manchester branch today for help finding the best storage around Manchester and get a personalised quote.