While the public eagerly awaits our new Cheam store in Sutton, we gave some lucky schoolchildren a sneak preview of our ‘under construction’ new site… 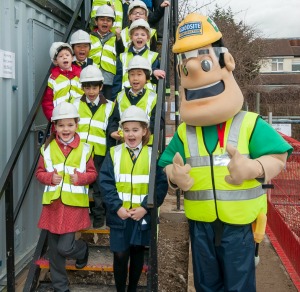 Access Self Storage has over fifty locations, and we’re just getting started. We are opening more stores all the time: at present, we’re working hard on getting the new Cheam site ready for personal storage, student storage, and business customers.

We are finding it really hard to contain our excitement, and we would be lying if we said we weren’t getting a little impatient to unveil our shiny, brand-new location. We’re a little way off the September grand opening, though, so we – and Harmonix Construction, the team building the new site – decided to invite some members of the Sutton community round for a sneak peek.

There are two things children love more than anything else: wacky cartoon mascots, and messing around with complicated machinery that they probably shouldn’t touch. Luckily for the kids of Westbourne Primary School, we happened to have both to hand. Harmonix got Ivor Goodsite (a real person, and certainly not one of the Harmonix guys in a big suit) to show the pupils some tricks of the construction trade. 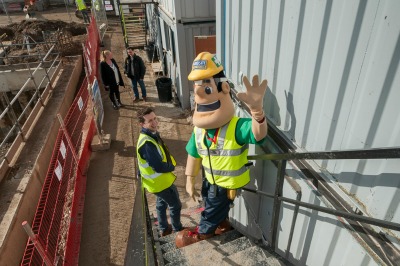 Gabrial Knoukamp, manager of Access Self Storage Cheam, said: “We just couldn’t wait for the new store to open, so we, along with the builders at Harmonix, decided to invite some local students around to see the exciting goings-on at our construction site. We had great fun showing them around, the kids had great fun, and we’d definitely do it again before the store opens.”

Safety, as always, was our top priority: pupils visited in three supervised groups of 12-15, and each one was issued with their own hard hat and high-visibility vest (which they loved). They were shown health and safety videos, enjoyed a brief induction, and gained a glimpse into life on a construction site.

Best of all, they were given the chance to look around – and even sit in the driver’s seat – of a real, working excavator (Access Self Storage, Harmonix, and Ivor were there to make sure they didn’t make off with it and rampage through South London). They took photos in the digger with Ivor, and once the day was over, returned home with a goodie bag full of construction-themed treats: stationery, puzzles, key rings, and more!

Project manager, Gearoid Keane, who led the visit, said: “The kids were really intrigued by the site and the experience – they were particularly drawn to the machinery. The bigger it was, the more interesting it seemed to be!” He added: “I think I speak for the whole team in saying that we greatly enjoyed the visit, and it was really worthwhile: for Harmonix and Access Self Storage, and – we hope – for the pupils as well. It’s definitely something we’ll look to do again in future!” 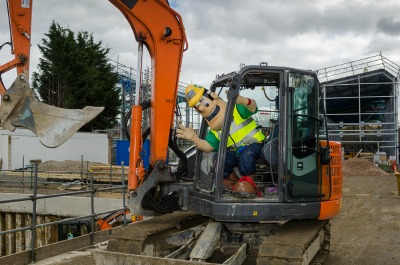 While you’re waiting for Access Self Storage Cheam to open, individuals and businesses alike can store their gear at our Croydon or Surrey stores.