Support Save the Rhino International with Access - donate to rhino conservation 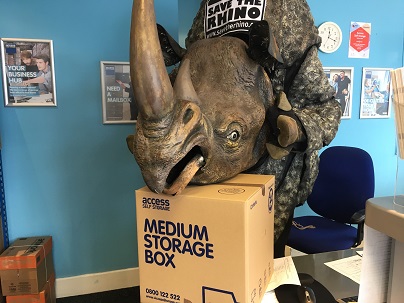 If you visit Access Self Storage Tower Bridge on Friday 22nd September you’ll be served by a rhino! Wait, what? Why, you ask? Well, that Friday is World Rhino Day and we’ll be doing our part to raise funds for Save the Rhino International, based in Southwark.

The charity is devoted to protecting and increasing wild rhinoceros populations in Africa and Asia. The rhinos’ lives are threatened daily by poachers, habitat loss and political conflict – as a result the wild rhino population has decreased from millions, to only 30,000 since the species first roamed the land! 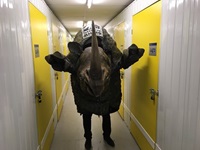 This year, on World Rhino Day, the staff at Access Self Storage Tower Bridge will wear the famous rhino costumes! What’s more, the store will be donating £30 to the charity for every new customer booking storage at the Tower Hill store between now and the end of September. So by booking a unit with us before then, you can also donate to rhino conservation.

There is also a collection bucket in the store’s reception area, should you wish to contribute a bit more, and you can also visit their donation page. 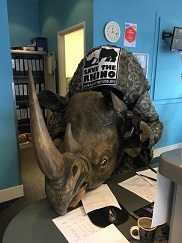 Access Tower Bridge Store manager Stefan Albert is one of the team who will be wearing a rhino outfit on Friday. He said: “At Access, we’re always encouraged to get behind local community campaigns and with Save The Rhino storing with us, we really wanted to give this great charity as much support as possible."

Josephine Gibson, Partnership Development Manager at Save the Rhino International, said: “Save the Rhino International collaborates with partners to protect endangered rhinos across Africa and Asia, so that rhinos can thrive in the wild for future generations. It’s great that Access Self Storage, our local storage centre, is supporting us by wearing our iconic rhino costumes on World Rhino Day, helping us raise awareness about rhinos and collecting donations for rhino protection. All of this helps us to continue with our work to protect endangered rhinos where they need our help the most." 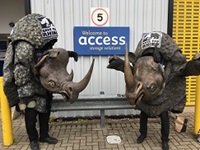 Anyone wishing to donate to rhino conservation at Save the Rhino International can do so by visiting the Access Tower Bridge store and contributing to the collection bucket in reception, or by kindly donating to the charity’s JustGiving page.

To find out more about Access’ collaboration with Save the Rhino International, or simply to see our rhino staff in action, make sure to stop by Access Self Storage Tower Bridge on Friday 22nd  September.